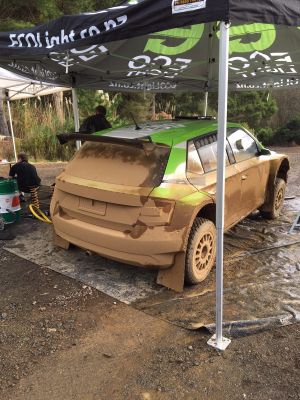 Glenn Inkster heads to the third round of the Brian Green Property Group New Zealand Rally Championship, the Joe’s Garage/Lonestar Rally Canterbury, keen to get some more miles behind the wheel of the ECOLight Skoda Fabia AP4+ car.
After a four season break from the NZRC, Inkster returned with a new generation Skoda for the start of the season and has produced plenty of speed already in the superbly presented car, but has suffered from a few teething problems that have side-lined him at the opening two rounds.
The South Auckland driver has had the opportunity to test the ECOLight Skoda for the first time prior to the Christchurch-based event, his first opportunity to drive the car outside of a rally, reporting that small but important changes have been made to the car set-up.
Inkster is also confident with pace notes coming from co-driver Spencer Winn, claiming things are progressing well towards his goal of a serious tilt at the overall title in 2017.
“We’re making really good progress with the car and I’m looking forward to getting to Canterbury to continue the learning process. It’s an event I’ve not really done before, so I’m certainly not expecting to set the world on fire, but we won’t be cruising,” says Inkster. “Spencer is really doing well on the notes too, it’s hard to believe he’s only done five rallies on notes. I’m really happy with the way things are heading.”
“The car is so exciting to drive, it’s a lot like our old Evo 6 in a lot of ways, which really suited the way I drive, but this is a newer, flasher and more advanced car.”
The Joe’s Garage/Lonestar Rally Canterbury Rally Canterbury run on Sunday 5 July. After leaving the start at Rangiora at 7.40am, teams will cover nine special stages in the Ashley and Okuku Forests totalling 171km, before returning to the finish in Manchester St, Christchurch from 5.30pm.