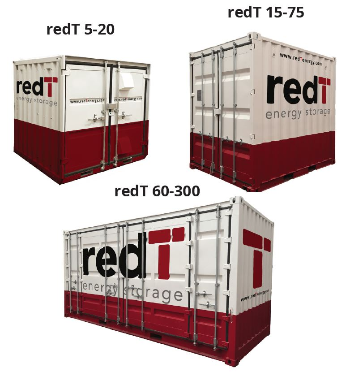 After 15 years of research and development, redT has developed a new and proprietary energy storage machine which enables the efficient and sustainable storage of electrical energy in liquid form.

We develop and supply durable and robust energy storage machines for use in a wide range of on and off-grid industrial, commercial and grid-scale applications.
Unlike conventional batteries, where energy is stored in a cell, our patented energy storage modules store energy in a liquid. This technology does not degrade like conventional batteries and affords exceptionally long life with (100%) discharge functionality, making the system perfectly suited to integration alongside renewables such as wind and solar.
The system is equally well suited to working alongside diesel generators in off-grid applications, improving efficiency and reducing expenditure on fuel and other associated costs.

HOW DOES IT WORK?

Vanadium Redox Flow Machine (VRFM) technology utilises the flow of vanadium electrolyte across an ion exchange membrane. When this occurs, a reversible electrochemical reaction takes place, allowing electrical energy to be stored and subsequently returned.
The technology relies on the ability of Vanadium to exist in four different oxidation states (V2+, V3+, V4+, and V5+), each of which holds a different electrical charge.
Demonstrated by the diagram, the electrolyte in the negative half-cell contains V3+ and V2+ ions, whilst the electrolyte in the positive half-cell contains V4+ and V5+ ions. This represents the machine in its charged state. On discharge, a redox reaction occurs in the central stack, creating a surplus of electrons at the negative terminal, generating an electrical current.
The setup of the electrolyte and the membrane stack can be compared to that of an engine and fuel tanks. The membrane stack (‘engine’) delivers power rated in kilowatts (kW), whilst the fuel (the vanadium electrolyte) delivers energy rated in kilowatt hours (kWh).